Many readers of this blog will know that Jisc offers, or is developing, services to help universities implement open access. In this post I’d like to explain where we are on several of these, and to outline what the next few months hold. I know that this kind of information can be useful for university professionals planning their own services for authors and readers. Here, I’d like to focus on open access to journal articles and conference papers. I’ll draft something similar on monographs shortly.

At the recent Jisc Digifest conference, I used the following slide to summarise the services we are either offering or developing, mapping these to a typical journal article lifecycle from submission, through acceptance and publication, to use. 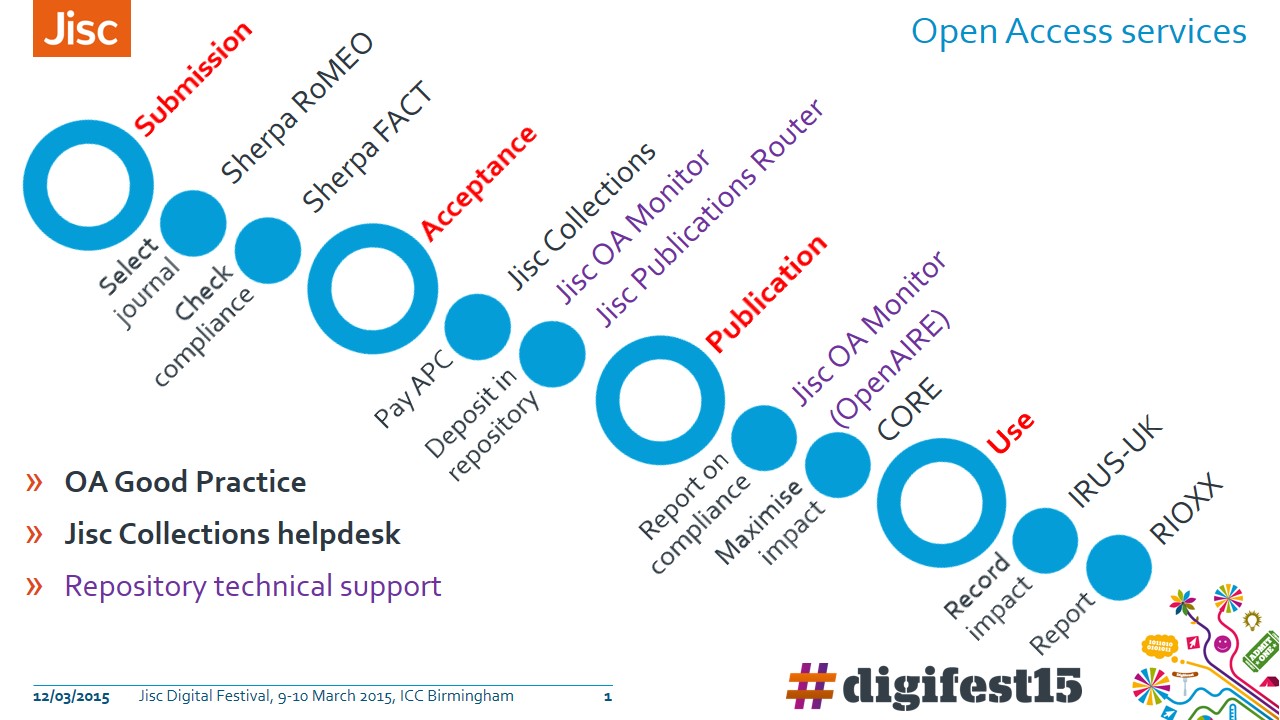 Around the time that an article is submitted to a journal, an author or intermediary may check that journal’s policy with respect to OA, and/or the degree to which the journal’s policy enables the paper to comply with a relevant funder OA policy. This is handled by the well-known Sherpa services, RoMEO, Juliet and FACT. Key dates for those over the next few months are:

The point at which an article is accepted for publication is moving from an event known only to the journal and the authors, to one in which the authors’ institution has a stake, both because that is when an APC might become payable, and because that is a key date in the REF OA policy.

Jisc Collections continues to work hard to negotiate offset arrangements with publishers of hybrid journals, to constrain the cost burden on UK universities. While these negotiations are ongoing (and so hard to pin dates to), the following might be of interest:

As mentioned above, universities have new interests in information about publications at the point of acceptance, and the Jisc Monitor project has proposed two new services that Jisc might offer: a “Monitor Local” service helping universities collect information about APCs, compliance, etc; and a “Monitor UK” service, which aggregates APC data from universities and potentially makes this a rather transparent market by offering reporting functionality over those data. For these proposed services, the key date is:

Of course, the REF OA policy remains a very high priority for many universities, and the idea of the Jisc Publications Router – automatically providing notifications or even manuscripts from publishers at the point of acceptance – is a very attractive one. We are planning for the next phase of its development, and will provide an update on this next week.

Jisc Monitor services are also relevant at the point of publication, for example to check compliance in published articles. However, also relevant are two other Jisc activities, CORE (with the Open University) and our involvement in the European Commission OpenAIRE 2020 project.

CORE improves the discoverability and usability of OA content from repositories. We are working with the OU to develop a sustainability plan for it that suits both parties and delivers real value to Jisc customers. As with Jisc Monitor, the key date is:

OpenAIRE is the infrastructure used by the European Commission to harvest, showcase and report on publications arising from Horizon 2020 projects. Jisc is a partner, and is working in a number of workpackages, from which some key dates are:

More details of the OpenAIRE project and its programme of work are available from its website.

When an item is downloaded from a repository that is hooked up to the Jisc IRUS-UK service, that download is recorded in a consistent way (using the COUNTER standard) by IRUS-UK, which then provides a range of handy reports, for example on downloads by repository and, most recently, by journal. It is worth noting that the IRUS-UK team are actively involved in the OpenAIRE 2020 project and, as the only such service working at scale, we hope will provide a model for other countries. Since CORE harvests full text from repositories, though, downloads from CORE have not until now been included in the statistics for a particular repository, so a key date here is:

There are several areas of Jisc activity that go right across this lifecycle, and the one with perhaps the most direct relevance to UK universities is the OA Good Practice initiative. While centred on nine pathfinder projects involving 30 universities, it includes a much wider community of practice – the email list has 144 subscribers as of today, professionals implementing OA in universities of all kinds, right across the UK, sharing good practice. A comprehensive list of dates for this initiative are given on its blog site, but key dates would include:

Our work on metadata standards is another activity that is relevant right across the lifecycle. There is a lot happening in this area, from the “End-to-End” pathfinder project, to RIOXX, the standard template for reporting APCs, and a CASRAI working group. The key date for the last of these, intended to consolidate the work of the others, is:

Finally, while there is a great deal going on, as I hope this post shows, we are aware that it does not always seem joined up, or easy to see as a whole. We are working hard to address this, and to produce both a model of the Jisc OA offer, and processes to deliver and communicate it more effectively. I hope you will start to see this being implemented from May onwards.