In March on this blog I outlined where Jisc was, and what the next steps were, with respect to a range of our activities. To avoid repeating a lot of the background information about these activities, I’d like to refer readers to that post, though I’ll repeat here for reference the slide showing the main Jisc activities across an article lifecycle. 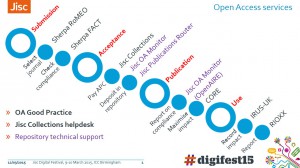 This post gives an update on those activities, where we’ve got to, next steps, and some sense of timescales in the medium term.

Sherpa/FACT accuracy. We really had hoped to release the findings of the survey by this time. I won’t go into details on why that hasn’t been possible so far, but suffice to say perhaps that the main message remains, that FACT is accurate, and is more accurate than each institution checking policies individually. I hope soon we can release the data to demonstrate this.

Sherpa/Juliet and the schema for OA policies. While we think this is complete, it is a rather intimidating spreadsheet, and so we are talking with potential partners about whether a simple interface can be built onto it, to make it easier to use. I’m not sure of the timescales for this.

Sherpa/RoMEO. Slow progress in setting up discussions with publishers about the clarity of their OA policies, just due to workloads. This will be a priority over the next few weeks.

Jisc Collections. We have published a set of principles for offsetting agreements with publishers, based on our experiences so far. This has prompted some discussion and features now in our negotiations with publishers on this issue.

We have also published a list of “desiderata”, or things that universities and Jisc would like journal publishers to do, that would help universities comply with funder OA policies. This has also prompted discussion. We have been through this list with the Publishers Association (PA) and Association of Learned and Professional Society Publishers (ALPSP), with individual publishers, with CHORUS and, most recently this week, with a group of publishers at a workshop co-organised by Jisc and the PA. As a result, we will revise the “desiderata” document, giving some next steps on many of the points raised.

After preparing outline business cases for Jisc Monitor and Jisc Publications Router, we now have senior Jisc backing to develop these as services, to be supported by Jisc pending full business cases in the spring of 2016. More information about the timescales for the development and roll-out of these two services will be posted here very soon by Steve (Router) and Jo (Monitor), but we are working to a July 2016 deadline, with the expectation that the services will in fact be operational well before then.

Jisc senior management have also agreed that we should work with the Open University to develop a partnership agreement to underpin the delivery of CORE, the global aggregation of OA content. Because it knows what is in UK repositories, CORE has the potential to help with compliance monitoring associated with the REF OA policy, for example providing data to Jisc Monitor. Work on CORE, Monitor and Router will be coordinated in 15-16, to make sure we deliver a really coherent and useful set of services for UK universities in the first half of 2016.

Following discussion with colleagues in RLUK, SCONUL, ARMA and UKCoRR, in an OA stakeholder group with whom we engage quarterly, we have agreed to pass on information about the implications of the EC Horizon 2020 OA policy [PDF] to their members in the next few weeks, followed by a concerted effort to contact directly the researchers on H2020 projects. This is in our capacity as the UK National OA Desk in the OpenAIRE project. Expect a new post from Mafalda here about another aspect of OpenAIRE, the availability of funds to support Gold OA for FP7 project outputs, very soon.

In brief, there are a few other things going on, which I’ll just mention here:

• Following a report we commissioned into universities’ progress in implementing the REF OA policy, we had a meeting in Jisc today about how Jisc would respond to the recommendations. Several members of the Jisc OA team were not at today’s meeting, so I need to consult with them, and other Jisc colleagues, before I can say anything more, I’ll post something here as soon as I can.

• Some of the OA pathfinder projects, part of the OA Good Practice community, are revising their focus for the next year, to address challenges that have become apparent over the last year. Sarah will provide an update on this in the next day or two on that blog, which I’ll also summarise here. In the meantime, the most recent newsletter from this area of work is now available, with project outputs covering baseline assessment and diagnosis of organisational strengths and weaknesses, OA workflows, advocacy, etc.

• There are a number of plugins, patches, etc for repository systems being developed. Balviar will shortly provide a summary of these on this blog, so that you can see what will be ready, to do what, when.

I haven’t covered monographs here. That will be the topic of a forthcoming post.

I hope this update is useful. I’ll continue to provide these every month or two.