This blog post is dedicated to the late David Kay, former lead architect for Jisc Monitor’s development stage, co-founder of Sero Consulting along with Liz and Ian Wallis: an ardent kayaker, a “Joe Russo’s Almost Dead” button designer and supporter (and thereby a Dead Head fanatic), and someone many of us called a friend: “Do you know a man is not dead while his name is still spoken” – Terry Pratchett, Going Postal

On the 6th of April 2017, Jisc Monitor ran its first user group workshop as a live service; Monitor Local officially became available during Open Access week, last October 2016, and since then we’ve been working to convert many of our “pilot institutions”, as we called those who helped us with the development phase of the service, to early adopters.  Currently, we now have 17 signed up and using or about to start using the service. It has also been during this time that we’ve been able to identify small glitches in how the system works, and we’ve been pleased and grateful that our adopters have been patient with the birthing pains.

The workshop’s aims were threefold: 1) to set the stage for what the user group would entail and define its function; 2) to showcase what the next iteration of the service will look like; and 3) to elicit feedback from the users on what their experiences have been to date and to enquire what they think we can do to improve the system.

Currently, the look and the feel of the system have remained static since its release last year:

The user has access to tabs for logging information on 6 different categories, through which OA teams can enter in information surrounding APC spend and funder policy monitoring; currently, a lot of the information is entered in manually, but the system does check for some elements of compliance with funder policy, namely licence and funder acknowledgement via KB+ and CrossREF. If something other than CC BY is in the system, Monitor Local will report that the publication has failed; if no licence is recorded, it will either fail or flag up the item as needing review. Much more of its functionality will be automated in future iterations of the system.

One of the sessions of the day came from Tom Davey, the Jisc OA team UX specialist, who showed some wireframes of what a future version of Monitor Local will look like, particularly the search function; his apt phrase was that a new search will have a “calming effect”; in short, it will make the system more user-friendly. There will also be some quick guides coming, which are the equivalent of the kind of thing when someone purchases a new camera, for example; they will be just enough information to get started with the system to get a sense of what it can do. 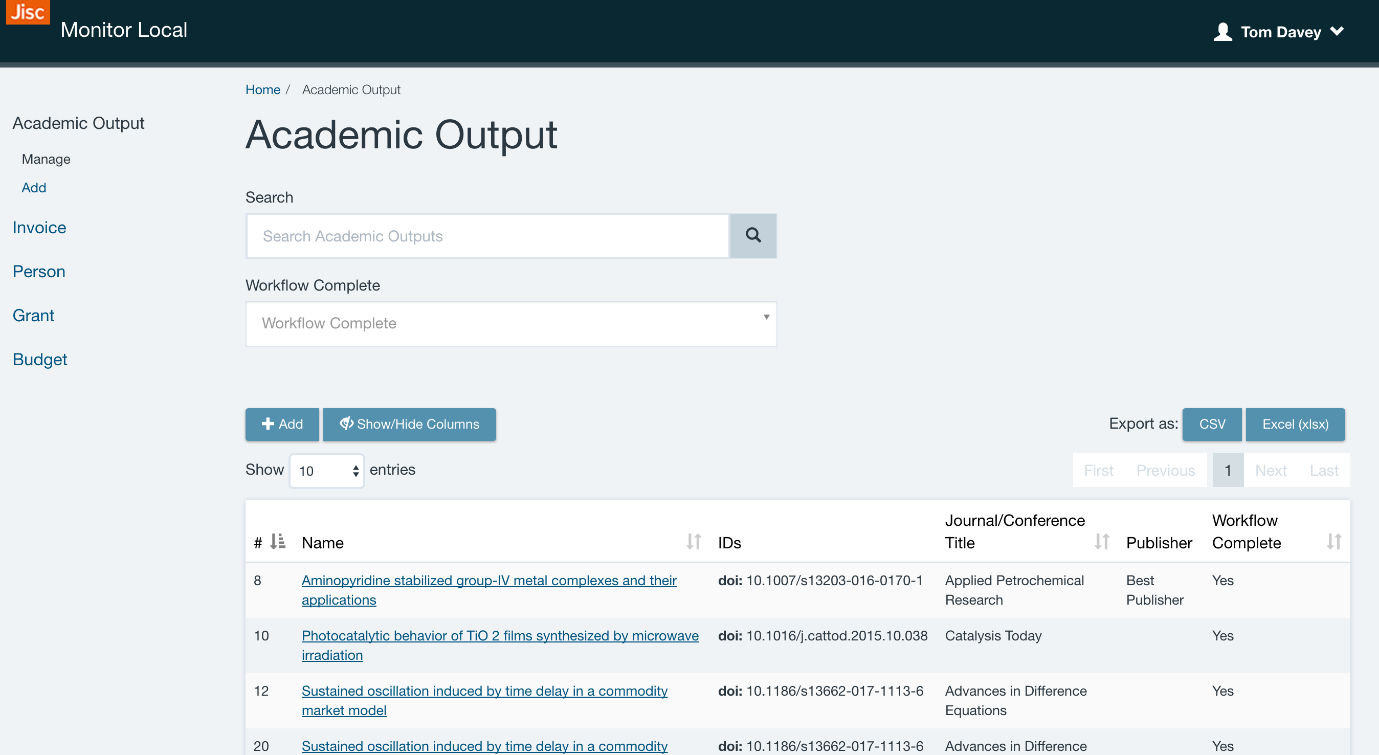 As you can see from the screenshot, the search category is accompanied by a window which will allow the user to see how much progress has been made with entering in information on a particular academic output, as well as see other items which have been completed.  Additional search filters will be added at a later stage, once we have managed to clear more of the product development backlog. 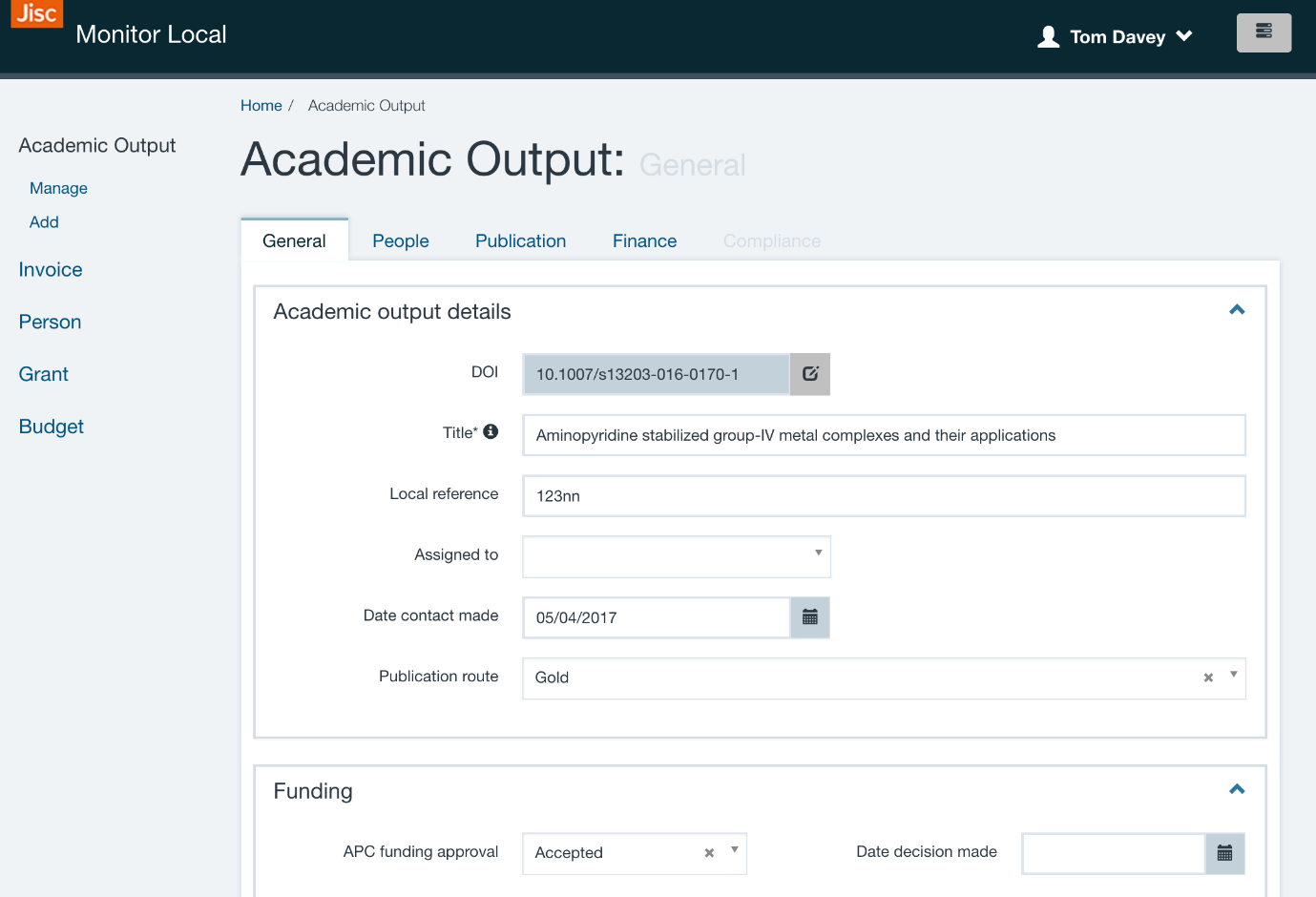 In this second shot, you can also see that there remains a consistency with the original version of the system, so that users will not suddenly be faced with an entirely new mechanism to master.  In addition, better compliance measures will be in place in the next version, 1.2, centred around compliance monitoring.

The workshop, above all else, allowed us to see where we needed to be moving with users who are familiar with the system as it stands, as well as get indications of some important improvements.  Among those changes are reporting mechanisms within Monitor Local specifically for funder policies with regard to REF. Part of that work will also involve the historical Total Cost of Ownership data, which we are planning to move into Monitor UK, when it is available.

If you want to learn more about Jisc Monitor, please get in touch: oamonitor@jisc.ac.uk.  There is also the MONITORUSERS@JISCMAIL.AC.UK listserv, where many are talking about the service and offering suggestions and feedback; it really is a great way to keep in touch with the ongoing developments, as well as get a sense of how institutions are working with the system. If you’re signed up to use Jisc Monitor and would like to be added to the listserv, just get in touch. In addition, we can offer your institution a live demonstration of the system remotely, as well as a glimpse of what Monitor UK looks like.