On July 18 2017 we held a workshop in Birmingham for members of the open access community to attend as a chance to discuss updates in open access, highlight concerns and successes and consider next moves in the open access arena. The event was a success and most people were pleased with how the day went and the topics that we covered.

After a quick welcome from Helen Blanchett, it was straight into updates on some Jisc services. Angela Hilton started with an update on Monitor Local and UK, confirming that work is being done to roll out Monitor UK by the end of summer 2017 and that in the meantime, the team have been concentrating on Monitor Local maintenance, including improvements to the interface and log-in process. Steve Byford then followed with an insight into Publications Router and an update on where we are with the service; 7 publishers are currently providing content and 18 institutions are using the Router, with development work being done to increase both of these numbers. Work continues to get Publications Router interoperating with DSpace repositories and discussions are being had with CRIS vendors and other publishers to eventually get them on board too.

Moving on to an update from the pathfinder projects, one year on from the open access good practice project, we heard from David Young and Ellen Cole from the University of Northumbria and Chris Awre from the University of Hull. The over-arching conclusions were that specialist teams are important for success in open access but that all stakeholders in the process must be involved to ensure transparency and wide representation. Both parties were in agreement that working alongside other institutions throughout the project provided more positive impacts than negatives.

After a quick break for lunch, it was back to discussions, this time around the key challenges that the community is facing. The room was abuzz with conversations about the strengths around open access but also the biggest concerns that stakeholders are currently facing. We asked people to name their top three concerns and some examples of these are listed below: 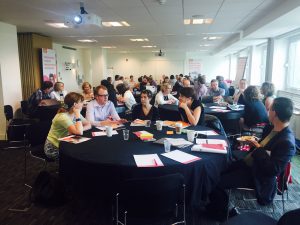 Despite these issues, it wasn’t all bad news and we also discussed the positives that the community has recently experienced:

After discussing the key challenges and successes, Rob Johnson from Research Consulting gave a presentation outlining the OA assessment survey. They are working with funders on the survey, which will be circulated to HEIs in the autumn, to gather information on topics such as compliance, costs, licensing and repository use, in order to learn more about the levels of open access content at institutions. Rob then went on to explain about the open access dashboard, a project which is currently in a feasibility study stage to determine whether there is demand for such a product. The prototype of the dashboard which Rob presented showed how it could draw together information on open access activity and services. The tool would give institutions an overview on their position but also allow them to do benchmarking, comparing their level of open access content with peer institutions. 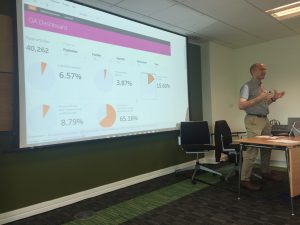 The workshop ended with a general thought of “what next?” It was clear that these sorts of events were important and that building upon a community that is clearly there already is essential to stakeholders in this area. People were happy to be working together and discussing common goals and this workshop gave them the opportunity to do just that. Working in different institutions means that they are not able to meet up and offer peer support and advice to each other as often as perhaps they would like to, so events such as these provide a good space for this. Instead of being competitive, institutions want to work together more with the aim of achieving their objectives around open access.

All tweets from the day can be found here: https://storify.com/hblanchett/jisc-open-access-community-workshop-18th-july-2017