Themes from the conference, by Monica Duke

The community is starting to understand how Current Research Information Systems (CRIS) and institutional repositories (IRs) fit together, what their relative strengths are, and how to use them together in institutional infrastructure.

For example, a discussion on “who owns?” the CRIS/IR processes in universities—libraries? research offices? – received lots of attention on twitter. The session entitled “Convergence of repositories and CRIS functions”, captured this theme very well,  and included the presentation of the results of the survey by OCLC and EuroCRIS, on the adoption of CRIS and IRs. The survey results are available in that presentation [slides], as well as an observation of the emergence of systems (like Haplo) which combine the functions of CRIS and IR.  There were, separately, a poster on Haplo and their work with the University of Westminster and also the announcement that LSBU will be adopting Haplo.

Perhaps unsurprisingly, despite the challenges from other systems, there was an overall strong feeling in favour of the value of repositories.  This was echoed in the closing keynote by Heather Piwowar [recording], when repositories were described as being essential ‘open infrastructure’ owned by the community. Chris Awre,  in his talk on the ‘Hull City of Culture’ archiving project, summed up the feeling when he said “my take away this year is that the repository is at the heart of the other infrastructure serving many purposes” [recording, slides].

Finally, Leigh Stork described the experience at Aston, where a decision was made to do without their EPrints repository, and rely on the PURE CRIS, but then quickly brought EPrints back. Having joined Aston shortly after these decisions, Leigh described the work she needed to do as a newcomer to map out the responsibilities and ownership of the different systems across the organisation, and tease out sensible workflows and information flows.  She compared this to “sorting through a big box of lego” [recording].

Perhaps the most popular tweet from the event was the comment on the lack of diversity in the picture of the team that had come up with the agile manifesto, as shown by the opening keynote speaker, Jeff Gothelf [recording]. Follow-up discussion highlighted whether this lack of diversity can impact good UX.

I attended a panel session looking at how to make sure collaboration is truly inclusive.  It was chaired by Nancy McGovern, who set the tone by her introduction to ‘radical collaboration’ as described in her writing.  The session contained tips for inclusive meetings such as: making clear all participants in a meeting have a responsibility for being welcoming and creating hospitality; accommodating personalities and neurodiversity; welcoming unanticipated guests; considering what inclusion looks like (if you are in the majority); and coming to the table with questions not answers.  One suggestion that came from the panel was that a guide on “some things you should talk about when you start a collaboration” would be a useful thing for the community to work on together.

Jisc’s own Tom Davey did a sterling job educating us on inclusion in design through his tweets and highlighting accessibility-related content.  If Twitter attention is a measure of success, then Simon Bowie and Kevin Sanders’ presentation on Open or ajar?: ‘openness’ within the neoliberal academy also hit the spot with the audience [recording, slides, paper].

The buzz around these discussions on social issues created a good counterpoint to the more technical sessions.

Jisc projects past and present

The Jisc content presented this year was very well received (see below for a full list of presentations); however, I was also struck by the many echoes of Jisc past that kept turning up.  These included the presentation on the EUROCRIS/OCLC survey mentioned above, which referred back to a report from 2011 from the Repositories Support Project ‘Repositories and CRIS: working smartly together’; Chris Awre referring to the Archivematica project which inspired and provided the basis for the Hull City of Culture project; the Leeds team presenting on usability of White Rose Repositories (WRRO) and WREO (their postgrad system) acknowledged that WRRO was originally funded by Jisc; work on SWORD past and current. The mentions kept on coming.

Many of Jisc’s current service offers, including CORE (run jointly with the Open University), the open research hub and Sherpa/RoMEO are seen as critical to the infrastructure. The closing keynote described CORE as “doing great stuff” with lots of data and Petr Knoth got a special mention for his hard work delivering several presentations!  At this event CORE also launched its discovery service. CORE Discovery helps users to discover freely accessible copies of research papers. It is backed by CORE’s huge dataset of millions of full text open access papers as well as content from widely used external services beyond CORE. It comes as a browser extension for researchers and anyone interested in reading scientific documents, a plugin for repositories, enriching metadata only pages in repositories with links to freely available copies of the paper and also an API for developers and third party services. The CORE team have written a blog post summarising all their activities at the conference.

I presented with Balviar Notay on growing a sustainable national ORCID consortium in the UK, including work supporting the technical infrastructure, such as the EPrints ORCID plugin. 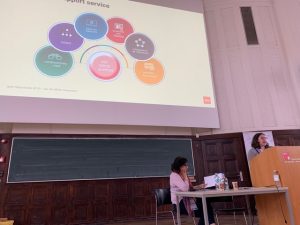 A full overview of our presentation is available over the UK ORCID consortium blog.

If you'd like to know more about EPrints' prize-winning ORCID integration (https://t.co/QVHId0XmNp…), developed in collaboration with @Jisc, the ORCID poster at our exhibition stand explains all #OpenRepo2019 pic.twitter.com/splOuTVLDi

This conference was an excellent opportunity for conversations and touching base with several of our ORCID consortium members – at least twenty were in attendance. As an example of outcomes, an idea for a case study on ORCID use in institutions using both PURE and EPrints has emerged, by linking conversations across 3 member institutions, and will be taken forward.

Between critical work carried out in the past, and services being developed or delivered today, it was hard to avoid the significance of Jisc’s contribution in this community.

A personal view of Open Repositories 2019 from Adam Field

As the technical lead on Sherpa services, I have always felt that it was enormously important to attend Open Repositories.  There is simply no other gathering of open access professionals (both technical and non-technical) that matches it for coverage of the breadth of what is a very diverse community.  Our software development practices and philosophies centre around an agile approach to system development, and this means that user feedback is essential to plan the direction of our development cycles.

This year marked the pre-release of the new version of our Romeo, on our v2.Sherpa platform at http://v2.sherpa.ac.uk/romeo .  We also have a planned decommission date for the old version of Romeo (December 2019).  We therefore attended Open Repositories with the goal of ensuring everyone in the community was aware of these upcoming changes.  Jane Anders, Sherpa’s service development officer, who leads the editorial team in managing the content of our services, presented the new user interface to the conference, and I presented the new data model and API in the technical track.  We were very pleased with the response from the attendees, and the coffee breaks were great for having ad-hoc conversations with members of the community who were on the whole very excited to see the direction in which our services are evolving.  We also got some extremely valuable feedback from our end-users, and the next few weeks promises to be quite busy in responding to these.

Now at #OpenRepo2019 @gobfrey warning us that @Jisc will deprecate the old SHERPA/ROMEO by Christmas 2019 - start using https://t.co/MAn2oA6IZY now! pic.twitter.com/7UGBwTVS9E

Outside of making myself available to our userbase, I managed to attend a good number of sessions this year.  My favourite was an explanation of how an android phone can be used as a web-server with built-in wifi to host a repository that can be taken into places without good internet access.  There were up to 5 sessions in parallel throughout the conference, which led to some very hard decisions, but recordings and presentations are now online –  I look forward to targeting some specific talks to catch up on some of the developer track trends and discussion about Plan S.

A full list of sessions with contributions from Jisc

Abstracts and presentation slides for the sessions below are available here. Where available, links to recordings are below: