There is a growing trend across European countries to include open access monographs in funder policy. Most recently, this push towards open access mandates was captured in the revised guidance on Plan S, published on 30 May 2019, stating that “cOAlition S will, by the end of 2021, issue a statement on Plan S principles as they apply to monographs and book chapters, together with related implementation guidance”. 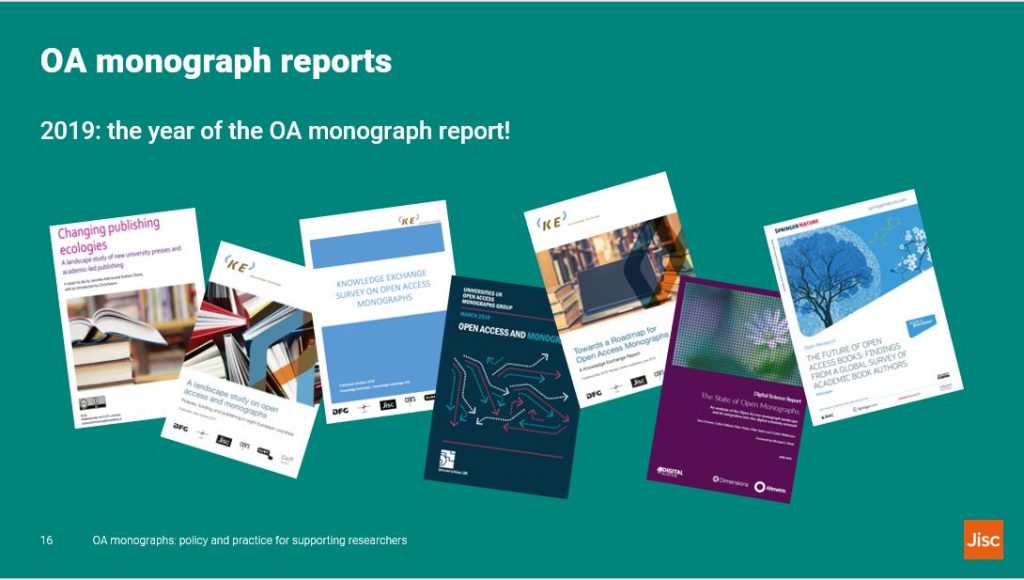 In the UK, the four UK HE funding bodies have signalled the intent to mandate open access for monographs submitted to the Research Excellence Framework beyond the 2021 assessment and UK Research and Innovation (UKRI), a signatory of Plan S, has launched its own open access policy review. This will cover monographs and book chapters.

At the same time, the UK has seen a growing movement of academic and library led presses, many of whom publish OA monographs.

However, there has been criticism and concern expressed about the move to open access policies for monographs from academics, learned societies and publishers. In order to engage with the community, the Universities UK working group on open access monographs held workshops for learned societies and publishers in 2018 (see the synthesis report). This was followed in May 2019 by an event for academics at Goldsmiths College, London (see this event report).

UUK have now released the final two reports from the working group. The first is a data analysis of Open Access Monographs in the UK carried out by Fullstopp GmbH and funded by Research England, Jisc, the British Academy and the Arts and Humanities Research Council. The second is the evidence review from the Universities UK Open Access Monographs Group, which details a number of key recommendations.

In the meantime, Jisc convened a fourth event in July 2019 aimed at research and academic liaison librarians, repository managers, press managers and other interested parties. The event gave the opportunity for attendees to address issues, share experiences and expertise, and to shape future work for both Jisc and the sector.

The programme consisted of an introductory presentation from Jisc and Research England, followed by lightning talks giving perspectives on researchers concerns. The afternoon session was then given over to two workshop sessions.

Workshop 1: What can institutions do to inform authors about OA? 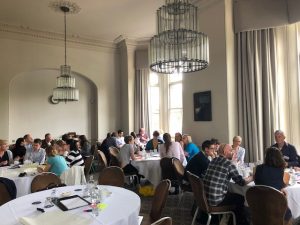 Building on the morning presentations, the first workshop asked participants to agree some practical steps in order to better support researchers. We have collated notes on the group discussions and feedback in order to put together ten suggestions, which we hope could be developed further, perhaps as collaborations between institutions in order to engage with researchers, learned societies and publishers?

Clear signposting for academics is required regarding where to go for support e.g. library, research support office, schools/depts, etc. and who does what. Clear messaging about compliance vs. support for good practice and the benefits of open access were required from all. This entails more communication between the library and research office/directors of research as well as visits to departments.

Despite the complexities, practical guidance needs to be as straightforward as possible. Flow charts and a decision tree of author options were suggested.

Using the term ‘monographs’ is perhaps confusing in itself. Rather than just referring to the scholarly monograph as a single authored long form piece of research, the term ‘monograph’ is often widened to a broader definition, which is loosely based on Crossick’s definition used in his 2015 report to HEFCE. Therefore, ‘monograph’ is used as a shorthand term to cover publications including (but not limited to) monographs, collections of articles by one or many authors, and scholarly editions of texts.

The UUK evidence report on open access and monographs has the following to say:

Throughout our discussions with academics, learned societies and publishers over the last twelve months, one of the most frequently asked questions is ‘what is the academic monograph?’ The term ‘monograph’ encompasses a broad range of long-form publications, typically published by scholars working in the arts, humanities and the social sciences. The monograph may refer to inter alia, scholarly translations, editions, commentaries, catalogues and edited collections, as well as the conventional single-authored monograph (Crossick, 2015; BA 2018). It is, in its broadest sense, a book written about one (mono) topic. As a vehicle for the long-form argument, the monograph has shown its capacity to be adapted into a myriad of print and digital forms, from enhanced digital monographs to minigraphs (a book of around 50,000 words), to collaboratively edited open wiki-books.

Workshop participants were particularly keen to bring out book chapters as one of the areas that needs support. Therefore, book chapters need to be added to definition and scope.

Related to an author decision tree, there is a need to provide as many publishing options as possible to researchers. This included showing that print is not expendable in an OA world (see also myth busting). It was felt that traditional ‘high impact’ books through commercial publishers were not the only route and that similarities between these publishers and New University Presses (see also cost) should be emphasised, e.g. quality, peer review, governance etc.

Book chapters were seen as a gateway to open access books. This was an area that participants wanted to be investigated further. For example, possible models for OA book chapters, such as chapter processing charges (CPCs) and or delayed open access under an embargo period.

It was seen as essential to get the message across that academics won’t be expected to meet any costs themselves. Costs would come from institutional pots, funders or would be waived in the case of many New University Presses.

6. Advocate for OA at every level within an institution

It is seen as important to take a diverse approach to advocacy, tailoring engagement depending on where a researcher was in their career and considering discipline differences. More support for PhDs and ECRs would be required in order for them to be proactive about publishing choices. Unfunded and independent scholars were also included.

Five myths were surfaced in the discussion:

It was suggested that this was a role that libraries would be particularly adept in tackling and that further events and documentation would be beneficial.

Although included in myth busting, it is important to explain this complex area and to inform researchers about what they can do with OA publications. It is crucial to engage in an area that suffers from little general understanding. Advice on rights clearance and knowing the appropriate questions to ask were considered. It was noted that Jisc’s Guide to Creative Commons for Humanities and Social Science Monograph Authors was still useful, although may benefit from an update.

One of the best ways to showcase the benefits of OA for monographs and to dispel some of the myths would be to provide case studies using existing OA publications and author endorsement. However, evidence of impact may be too much to ask in the near future, although there is data on books submitted to the 2014 REF that are open access. Subject specific OA ambassadors or champions were seen as important. Related to this was the involvement of academics in policies/developments via open research advocates.

Finally, it was considered as absolutely essential to engage fully with researchers and to listen to their concerns – although these should be challenged where appropriate (see myth busting). This is partly to address perceptions from academics that people are having conversations behind closed doors. It was suggested that institutions hold regular ‘State of the Nation’ engagement meetings and that these take place in the department/faculty.

It was interesting to note that one of the thoughts in the workshop was to discard the softly, softly approach and use shock tactics and realism. However, it was also viewed as essential to manage expectations, to under promise.

In the second workshop session, delegates discussed what funders, Jisc and universities could do to take us further down the road to open access. This included thoughts on quick wins and the messaging that needs to be shared now in order to shape academic research culture and perceptions of OA books in the future?

What Research England could do?

Inevitably there is a certain amount of crossover between the two workshop sessions. For example, the support for ECRs that could come from libraries and the guidance that could be issued by Research England to help to guide ECRs into making more proactive choices, particularly around converting their thesis in to their first monograph. DORA was another area that Research England could support. Specifically, the sometimes-conflicting policies of research funders with recruitment and promotion panels, where DORA has not been completely integrated within the university. It was felt that Research England could have a role in checking that universities had both signed and implemented DORA.

Research England could further assist the conversation, by advocating open research at every level (even if not part of the policy), helping to bridge the gap between libraries and research offices by linking grant applications and funding, and to assist in providing examples of success in OA monographs particularly by demonstrating impact (through REF impact statements, for example).

Regarding policy, a criticism of OA journals policy is that there are many diverse polices to follow. A simplified version was required for OA books, and this would help librarians get the message across. It was noted that a one policy approach would be easier to understand and would also be understood by the tax payer/general public, especially if plain English was used, e.g. jargon free.

There was an emphasis on a policy that was seen as fair, realistic and supportive, based on good practice and incentives rather than compliance and mandating. This was particularly important for the longer timeframes involved in monograph publishing. Incremental policy steps were mentioned, for example for book chapters and green OA. Support for innovation was also noted.

What Jisc could do?

The workshop considered three main areas where Jisc could assist:

What can universities do?

Two areas came up for universities to address. The issue of DORA and the need to reward OA in academic career promotion was seen as a key issue. Secondly, there is currently a lack of staffing to keep up with the expected demand, which would follow a policy on OA monographs.

Lack of time prevented a detailed discussion around business models. However, it was noted that different models were required and that they needed to be affordable and sustainable, implying that a BPC model was neither of these. A read and publish model was also suggested and this warrants further investigation. However, costs might need to be considered on a case by case basis.

A collaborative approach to infrastructure is essential in order to have a more joined up approach and to decrease costs for all. Therefore, it might be wise to invest in infrastructure services rather than content, a potential role for funders? Standard funders and publisher policies and standard terms, e.g. using Persistent Identifiers were required, such as DOIs for each book were also required.