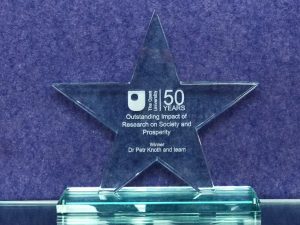 On October 23rd, The Open University held the Research Excellence Awards 2019 Ceremony at the occasion of the OU celebrating 50 years of opening up education for all. Since it was established The Open University has empowered a vast number of students to transform their lives through learning – helping to make the impossible, possible.

CORE was presented with the award for “Outstanding Impact of Research on Society and Prosperity” This important award reflects the clear value CORE represents to its millions of users. CORE is the largest repository of Open Access scientific knowledge globally.

The ceremony took place and the winners were announced at the MK Dons Stadium during ‘OU Research at 50’, the month that the OU has dedicated to celebrating its research excellence.

Dr. Petr Knoth commented, “I am delighted to win this award and would like to thank everyone who contributed to the development of CORE since its start in 2010, including our key partner Jisc as well as other funders, our users and commercial customers and our fantastic and talented current and former staff. It has been a great pleasure for me to be able to lead this fantastic team that is so passionate about the mission of opening up research knowledge to all, including not just researchers, funders and librarians, but also the millions of our users from within the general public who are able to discover and access the results of research they have contributed to by paying their taxes. It has been a privilege for me to be able to run this project from within the Open University which fully embraces the mission of openness, lifelong education and knowledge sharing. I hope the work of my team, a service that has become an essential part of the open access infrastructure, will contribute to making the Open University a centre of excellence for Open Research in the future.”

Balviar Notay of Jisc, a key partner of the Open University in delivering CORE also joined the awards ceremony and added, “CORE is widely recognised as an enabling infrastructure that allows for text mining, business analytics, research analytics and compliance monitoring to name but a few. CORE plays an essential role in the long-term benefits of open access and open scholarship. I am really proud to be working with this internationally recognised team for their expertise in the field of computer science and thank them for their hard work, commitment and passion that has made CORE the success it is today.” See video interviews here.

CORE is continuing to grow both its content, user-base and range of services. With now close to 14 million full texts and 135 million metadata items from about 10,000 providers, CORE aims to facilitate free, unrestricted access to research for all.

Today CORE ranks 4,777th on Alexa for global internet traffic and serves on average about 300k users every day. 93 million people used CORE in the last twelve months and CORE usage increased dramatically in 2018 and hit the 10 million monthly active users mark in January 2019 (10.41 million users) which constituted a 571% increase of users compared to January 2018.