CORE is the world’s largest aggregation of Open Access papers run in partnership with Jisc and the Open University. As of March 2020, CORE provides access to close to 25 million free to read full text research papers with more than 19 million full texts hosted directly by CORE and more than 179 million searchable research papers. 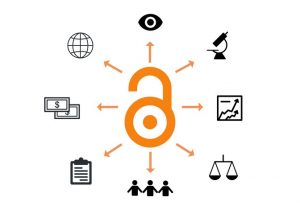 CORE is one of the Jisc’s Open Access (OA) services. While harvesting papers from data providers globally, since June 2014, CORE has been acting as the UK National Aggregator of research outputs. CORE delivers a number of key measurable benefits to institutions, repositories, and researchers through its services. The value of CORE is not only provided by its services, but by helping others in the delivery of their use cases. This makes CORE an enabling infrastructure, allowing for text mining, business intelligence, compliance monitoring and research analytics.

Let’s have a quick look at the CORE services and see how they enable and add value to some other Jisc services.

The first one is CORE API, which provides programmatic access to CORE data, enabling third parties to embed it in their services. For instance, OpenDOAR use CORE API to identify and collect information about new repositories. Additionally, CORE provides statistics on the harvesting process of a repository, i.e. timestamp, metadata and full text count – and other historical data about the increase of the number of metadata and full text overtime, which OpenDOAR displays within its service. 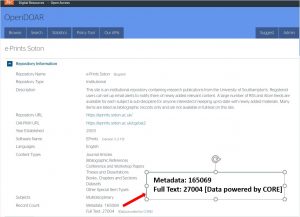 The second service is CORE Dataset, which provides in a machine readable form, access to CORE’s collection for computational purposes. It enables Jisc’s key customers, i.e. UK HEIs, to download the full set of CORE data to analyse information about research papers and carry out text and data mining. Until now, 156 users from UK HEIs have registered for the dataset or the API.

CORE FastSync is the third service which provides fast, incremental and enterprise data synchronisation using a single API. CORE API, Dataset and FastSync are “CORE Raw Data services” which are relevant to Jisc customers wanting to analyse and mine scholarly data from across the world. This service can be useful for the purposes of a wide range of use cases, including business intelligence, policy compliance monitoring, text and data mining, etc.

Another service is the CORE Repository Dashboard. This tool enables UK Universities, research support staff  and  repository administrators to manage their collections and provides repository statistics counts, an essential aspect in building internal research impact reports. CORE has embedded the IRUS-UK statistics as well as the RIOXX metadata guidelines in the CORE Repositories Dashboard tool.

CORE also provides CORE Recommender – a plugin that provides similar papers to the ones that a user is looking at, which has been  installed by many repositories. It advances the journal’s services and increases the repository’s click through rates.

CORE Discovery processes information from a great number of authoritative scholarly data sources to discover and verify information about the free availability of articles, wherever they are located on the web. CORE Discovery helps Jisc to enrich the number of full-texts for their end-users. What is more, CORE Discovery enables Jisc Collections to understand which of the articles that are normally covered under a subscription are freely available. This could be used to optimise the cost of the big publisher deals negotiated by Jisc Collections on behalf of all British HEIs.  Furthermore, CORE provides its discovery services to a range of other discovery services including the Open Access Button and Lean Library, making it a useful tool for researchers to find free copies of content as well as reference librarians.

CORE is also making research papers from Jisc customers more visible, leading to large increases in the usage of a repository’s content. In March 2019, we analysed data from 21 UK institutions by logging download statistics via CORE and directly from the repository using IRUS-UK. We found on average that a repository’s membership of CORE increases total overall downloads of content by about 15%. 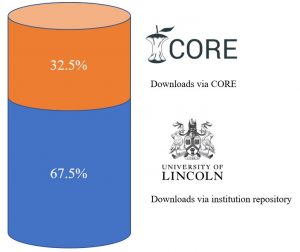 For many institutions, this boost is even larger. As shown above, for the University of Lincoln, 32.5% of all content downloads were via CORE. A higher boost was present in repositories better supporting interoperability standards and having more full texts hosted in the repository.

“When I started working on developing CORE in 2011, aggregating research papers from repositories to provide programmatic access to them, I immediately realised the tremendous potential this had for enabling other developers to create new services and for researchers to analyse the data. There were many at the initial stage who doubted the value of such work. I remember repeatedly sitting at meetings where every time people asked me about the concrete value of such an enabling infrastructure service. So for me, it is amazing to see that with every new integration of CORE into existing services, I see that fewer people are asking this question as they can clearly see the value themselves.”

However, there are other Jisc services and activities that derive value from the CORE service or for which CORE constitutes a strategic opportunity.

Petr Knoth is working on the RIOXX Governance Board and has already proposed several improvements to the RIOXX application profile. CORE also presented its UK repositories metadata compliance analysis in contribution to a UKRI meeting in London in 2019 organised to understand the status of metadata compliance.

Furthermore, CORE occasionally provides, on request, statistical information to the UK’s funding bodies and analysts commissioned by Jisc. This data relates to the number of repositories and the content growth in them, including full text and metadata records, thus assisting with questions such as the estimation of the percentage of Open Access proportion in the UK.

In June 2019, Research England released REF Audit Guidance, which describes how the compliance with the open access policy will be audited. Among other things, the Audit Guidance specifies that CORE data will be used in the audit. This document is to provide advice and recommendations to UK HEIs with regards to exposing data to CORE through their repositories. CORE has now developed a brand new version of the CORE Repository Dashboard. The tool was specifically designed for research support administrative staff and offers an insight into the outputs’ deposit dates, helping to identify non-compliant outputs.

The repositories community is one of the primary CORE stakeholders and the service has created many tools to showcase not only the harvested content, but also the content providers that host this content. We constantly consider ways of improving our collaboration with repository managers and research administrators and create services that fit this community’s needs.