In this post, Rob Johnson of Research Consulting reports on the results of recent research to inform the development of Jisc’s OA services. We think the findings will be of wider interest. Rob writes:

Back in February we were asked by Jisc to help inform the development of Jisc’s future open access (OA) services, including Monitor Local, Monitor UK and Publications Router. Jisc were also keen to source institutions’ views on a proposed OA support service, encompassing both technical services and wider support for the OA community in HEIs.

We realised that there were a number of gaps in the evidence base that needed to be filled for Jisc to make informed decisions about its future support for OA. Some of the key questions we wanted to address were:
• How many peer-reviewed publications do UK universities produce each year?
• What systems do they use to manage these publications?
• How do institutions view Jisc’s support role in the area of open access?

We set out to answer these questions by means of a survey of HEIs (to which 56 different institutions responded), and by combining a number of existing sources of data in order to paint a picture of the open access landscape in UK higher education.

We are now pleased to present some of the key findings here.

Lies, damned lies and statistics (or ‘How many peer-reviewed publications do UK universities produce each year?’)

One of the questions that has always troubled me in the open access debate is that we don’t have a clear picture of how many peer-reviewed articles are published by researchers at UK institutions. Actually, just knowing how many UK universities there are is a vexed question when you really look into it, especially when it comes to the federated London institutions. Fortunately it’s the job the Higher Education Statistics Agency to worry about such things, so we went with their figure of 161 UK universities, generating total research income of £5.1 billion in 2013/14.

HESA don’t collect figures on article numbers, so we have to look elsewhere for this. The rule of thumb in recent years has been to use a figure of about 140,000 articles per year, derived from Elsevier’s 2013 report on the UK research base. We relied on this ourselves in our 2014 study of OA costs, but were careful to acknowledge some of its limitations (not all UK researchers are affiliated with HEIs, many papers involve multiple institutions, and so on).

This time we did a bit more digging and, with the help of staff in Jisc’s OA team, we collated data [available here] on the number of publications attributable to each UK university in the 2014 calendar. This was done using a combination of data from Web of Science and Scopus, and allowed us to get a much clearer picture of both total article volumes, and their distribution across the sector – as shown in Figure 1. 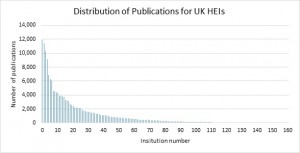 What the data told us is that publication volumes from researchers affiliated with UK HEIs are growing at about 2% per year, and in 2014 there were a total of about 145,000 such papers. However, co-authorship means that a single paper can have authors at multiple UK institutions. As a result, we estimate that, for every UK institution to hold a copy of all their peer-review publications, they would collectively have to handle about 175,000 papers per year. However we look at it that is a lot of work, and so even a small efficiency saving per paper could have a big aggregate effect across the sector. All this is based on various assumptions and caveats which I won’t go into in detail here – but if anyone is really interested just ask in the comments and I’ll explain!
This analysis also allowed us to better understand the distribution of articles across the sector. It comes as no surprise to find that the distribution of publications across the sector is heavily skewed towards research intensive HEIs:
• The 24 Russell Group institutions account for 68% of total publications (and 74% of research grants and contracts income, excluding HEFCE QR funding)
• The 45 other pre-1992 universities produce a further 22% of publications (20% of RGC income).
• The remaining 92 institutions (post-1992 and specialist) account for less than 10% of UK publications between them, and receive only 6% of RGC income.

The next question we asked was which systems institutions use to manage all these publications. Based on a combination of survey responses and web research, we’ve constructed a picture of current research information/publications management system usage across the UK. Many institutions are in the process of implementing new systems, so this is something of a moving target, but we think it’s a pretty good overview of the current position.

The distribution of systems by number of institutions looks very different to that based on number of publications, as Figure 2 illustrate. Technically speaking, only a minority of UK institutions use a current research information system (or equivalent). However, in terms of publications, over 90% are produced by institutions that use a CRIS, so it is crucial that initiatives designed to promote or simplify OA publishing at a national level work effectively with these systems. Elsevier’s Pure system has the largest user base within the UK HE sector, but a significantly larger number of UK publications are managed through Symplectic’s Elements software, reflecting its popularity with the very largest institutions.

Finally we looked at usage of repository software across the sector. Here it was more difficult to develop a comprehensive picture, as we could not readily establish whether 17% of institutions had a repository at all, and if so what software platform is used. However, the publication volumes for these same institutions were so low as to be negligible at a sector level. 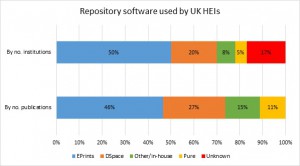 In contrast to the adoption of current research information systems, there is no clear correlation between institutions’ research intensity and choice of repository software. EPrints and DSpace are the clear market leaders (collectively accounting for 73% of institutions by number and 70% by volume of publications), but a number of other systems are used, and there is growing trend for institutions to use Pure’s own repository functionality.

Finally, we asked the survey respondents about Jisc’s role on OA, by asking them for the top 3 sources they turn to for support.

For non-technical support (Figure 4):
• Over 75% of respondents said that they would choose Jisc as one of the three sources they would look to for all of the areas of support surveyed.
• For those HEIs who chose Jisc as their primary source of support, the other two sources chosen were expertise within the institution and other HEIs.
• Hence the vast majority of respondents see Jisc as a key source of external support, alongside the expertise that exists within the sector itself. 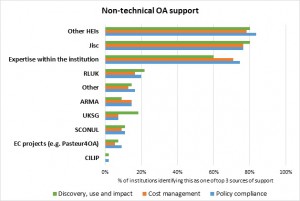 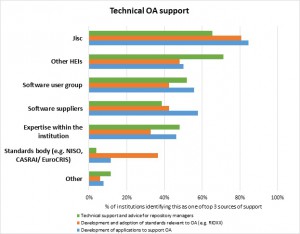 What is clear from these findings is the importance of Jisc’s role in enabling HEIs to make the transition to open access, but also the need for Jisc to working in partnership with other stakeholders. These include software suppliers, the professional and membership associations in the library and research management communities, and staff within institutions themselves.