In a recent blog post, Jisc Collections reported how the Springer Compact agreement was progressing in the UK. This blog post assesses the progress made in the first 9 months of the agreement between January and September 2016.

The Springer Compact agreement was launched in January 2016, following a pilot phase between October and December 2015 when 368 articles were made available on open access free of charge. The Springer Compact agreement is a flipped model which enables researchers from 91 participating UK institutions to publish their articles immediately as open access in ~1,600 Springer journals as well as to access all content published in ~2,500 Springer journals.

In this flipped model, rather than paying a subscription fee and an unknown number of APC charges, the institution pays a set fee for unlimited APCs based on their 2014 APC expenditure with Springer and a top up fee to cover access to all the subscription content – thus containing the total cost of ownership.

This model moves away from the traditional historical print spend model aiming to reduce cost and administration barriers to hybrid open access publishing and to increase open access. All UK articles published in eligible Springer Open Choice hybrid journals are made immediately open access upon publication and are automatically compliant with research funder requirements. 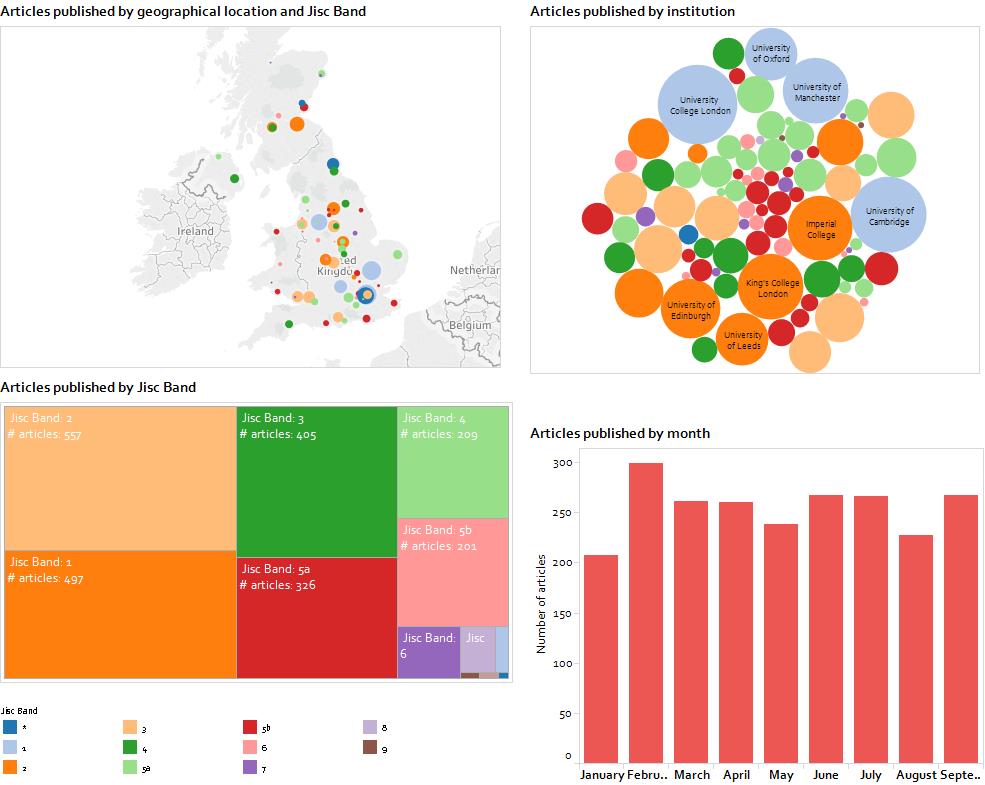 In the first 9 months of the agreement, 96% of UK institutions have already published open access articles equivalent to or in excess of their total 2014 APC spend. These institutions are publishing more OA articles than they did in 2014 but the cost to the institutions is capped.

Figure 1: Open access articles published by researchers from 91 UK institutions in Springer’s hybrid journals in 2015 and 2016.

Similarly, the number of articles being published on Open Access (Figure 2) versus non-Open Access has been increasing on a month-by-month basis when comparing data for the same month in 2015 and 2016. Up until now, February (+464%), March (+350%) and April (381%) were the months with the highest increased in Open Access published articles. 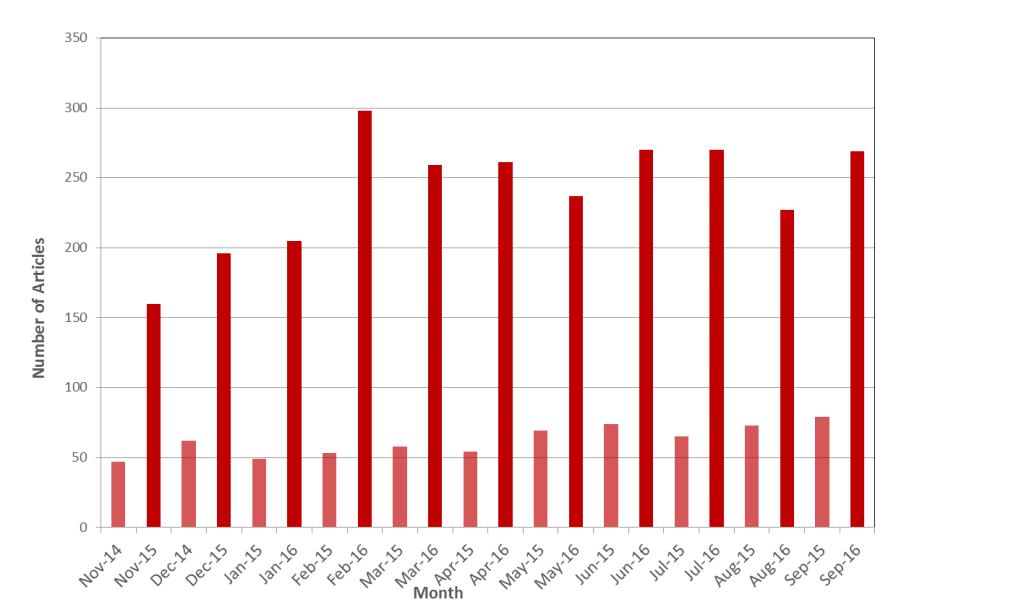 The subject areas with most articles published include Medicine (22%), Biomedical and Life Sciences (18%), and Education (9%) (Figure 3). The subject areas that experienced a higher increase in the number of articles published in September 2016 when compared to the number of August were: Education (+12 articles), Physics and Astronomy (+11), Law and Criminology (+7), Behavioural Science and Psychology (+14), and Economics and Finance (+6). 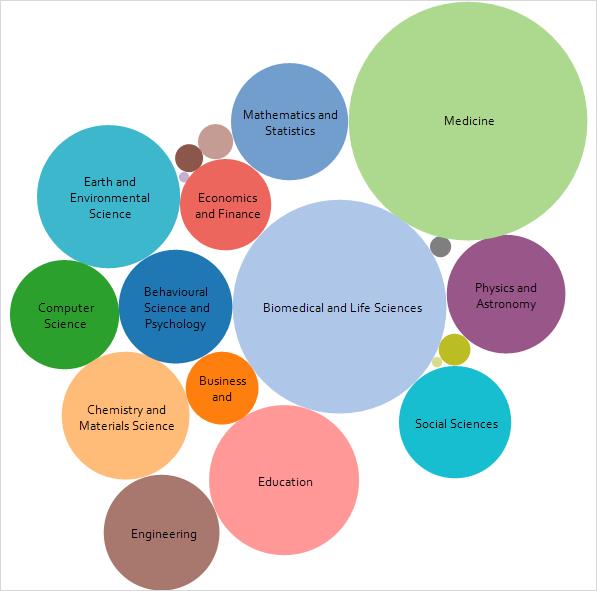 The journals with the highest number of publications include Diabetologia (1.6%), Synthese (1.2%), the Journal of Autism and Developmental Disorders and the International Journal of Advanced Manufacturing Technology (1% each) (Figure 4). 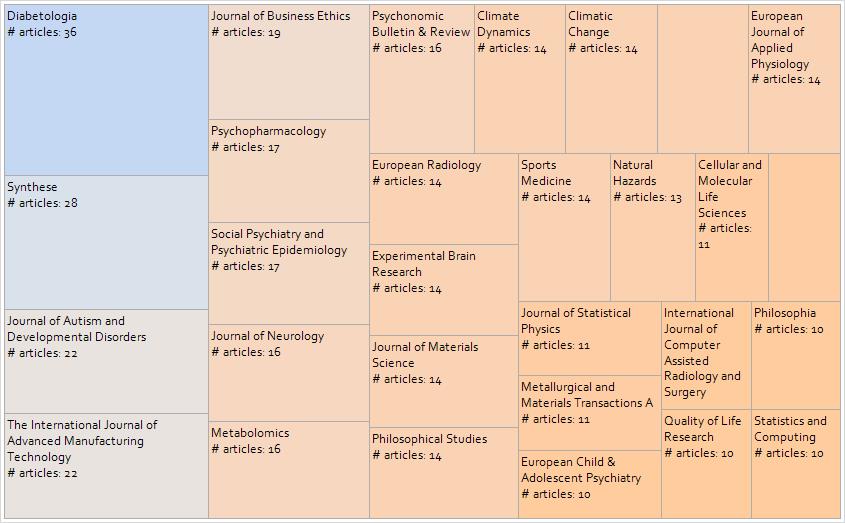 Figure 4: Journals with the highest number of publications.

All 2,292 articles were published under CC BY licences as required by the agreement supporting compliance with RCUK and COAF funder policy and will be deposited by Springer in Jisc Publications Router.

At the international level, the UK, the Netherlands, the Austrian Science Fund and Germany’s Max Planck Society   are taking part in the SpringerCompact agreement and also making their data (i.e. digital object identifiers) openly available through the OpenAPC initiative. Based on the information available online, the UK is the country with the highest number of articles published in 2016, with 67.4%, and is followed by the Netherlands (28.3%), Germany’s Max Planck Society (3%) and Austria’s FWF (1.3%).

By working with Springer and UK institutions to implement this model we continue to identify a number of areas where further improvements could be made. Some of these are about ensuring consistency in reporting (for example, by ensuring that research funders such as RCUK are acknowledged in the articles), others are about communications with authors and understanding the reasons for the high number of articles opt-outs (eligible authors deciding not to publish on open access). Jisc Collections will continue to monitor and evaluate the effectiveness of this agreement and to share findings and recommendations for best practice with institutions and publishers. We also hope that other publishers will be encouraged by our evaluation of the Springer Compact model and consider exploring similar flipped models.